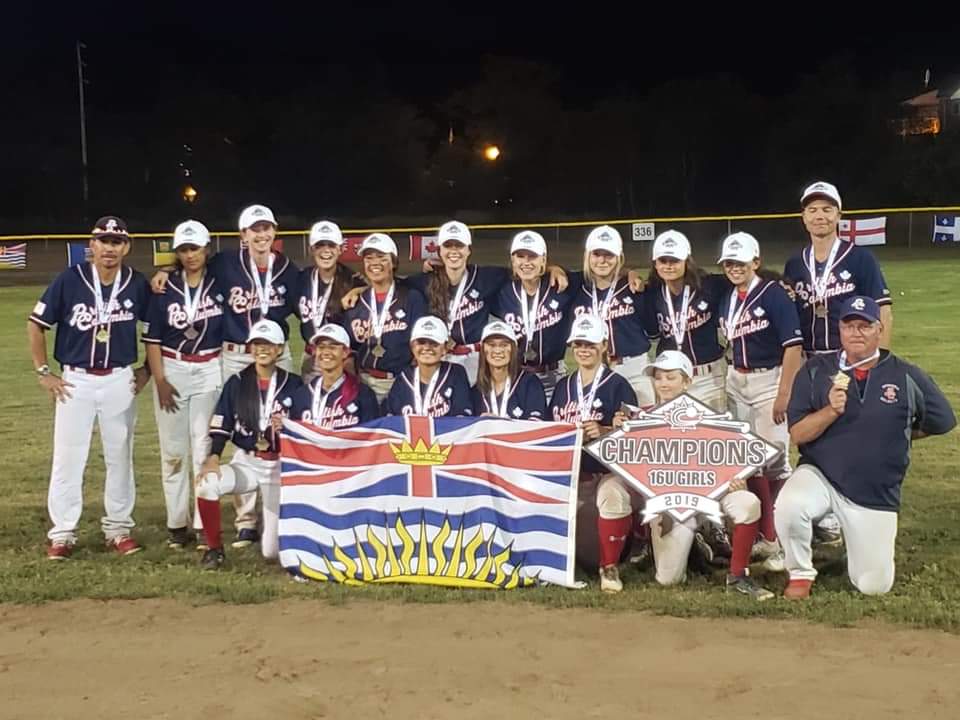 July 31, 2020 - Baseball BC is excited to announce High Performance Programming this summer for Females

2019 - In the couple of weeks heading up the Nationals 2019 in Nova Scotia Marty van-der Loos and his coaching staff consisting of Rob Ross and Andres Losin had the girls out to 2 practices a week plus exhibition games and a 3 day camp the weekend before leaving for Nationals.

Once at Nationals no team was taken lightly and each game had a clear plan laid out by the coaches.  Other than the first game against Quebec 2 where they allowed 11 runs against while scoring 21 the team dominated all other teams.  As the games went on the confidence grew as did their attitude in believing they could do this.  They allowed only 1 more run for the rest of the tournament.  They went on to have 4 shut outs ending with a perfect 6 – 0 record to bring the gold back to BC after 9 long years of struggles and patience.

Special thanks to Val Greenwood (Team Manager) and Al Forman (Director - Player Development) who came to the ID camps, selects camp and attended 16U games.  Their knowledge, wisdom and time volunteered won the respect of the players, coaches and parents.

Also many thanks to the parents for their belief and support of the program.  In Nova Scotia all the players except for three (3) had at lease on parent in attendance.  We even had a set of Grandparents travel from home to support the team.

Thanks for participating in Baseball BC’s High Performance Program. There were over 60 athletes identified across the province, from which many received an invitation to the Provincial Camp.  50 of BC’s best female athletes attended Camp in hopes of bearing the Team BC flag at the Baseball Canada Championship this August.

According to coaches & evaluators, this year was extremely difficult to make selections due to the unlimited talent present & skills that were displayed.  The fine play that followed at the tournament didn’t make matters for coaches any easier.  This is great for the overall program as the future is bright.  The young female talent we are seeing truly is exciting.  If not selected this year, maybe next season is your time to shine.  Keep working hard and you’re bound for good things.

For those who were selected & invited to Team BC - 16U, Congratulations to you & your family.  Your efforts have paid off & we are proud for you to represent our province at this year’s championship.  Alternates will train & practice with the team but are not to register until officially invited by the head coach.  The Championship registration link will be emailed direct to team selections &/or alternates, if needed.  Again, congratulations and we expect & know you will represent BC as you would yourself.

CONGRATULATIONS to TEAM BC SELECTIONS:

16U Team BC - GOLD MEDALISTS

16U BC Selects Team Page

Check out the videos at the link below focusing on Girls Baseball:

Congratulations to all athletes selection to Team BC.  It is an honor to be recognized and to be part of the Baseball BC Provincial Program and we hope this has & will help you develop your potential to play at the highest level possible.

For those not selected to this years team, we would like to thank you for participating in this year’s provincial tryout camp. We had a great turnout and commend you all for making this a very difficult decision for us.  We wish you the best for the rest of the summer and look forward to seeing you again next year & beyond.  This experience has been very valuable to your growth as a player, and our hope is you keep learning and loving the game. Continue to show everyone around that girls can play ball!

Congratulations Females Selected to 16U Team BC - 2017

Alternates (named to team above if needed):

Congratulations to the 16U Girls named to Team BC & winning a Bronze medal...

Congratulations to the following athletes..!!!