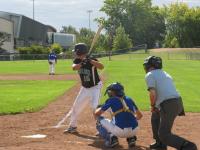 The Lower Mainland Baseball Association completed its 23rd season of play with the crowning of three divisional champions in late September.  The LMBA expanded to 34 teams and registered 600 players in one of its busiest seasons.  In addition to completing a 300 game schedule, 16 teams competed in the 2016 Americas Masters Games hosted by the City of Vancouver in August.