Umpires have Plenty of Fun at Nat Bailey! 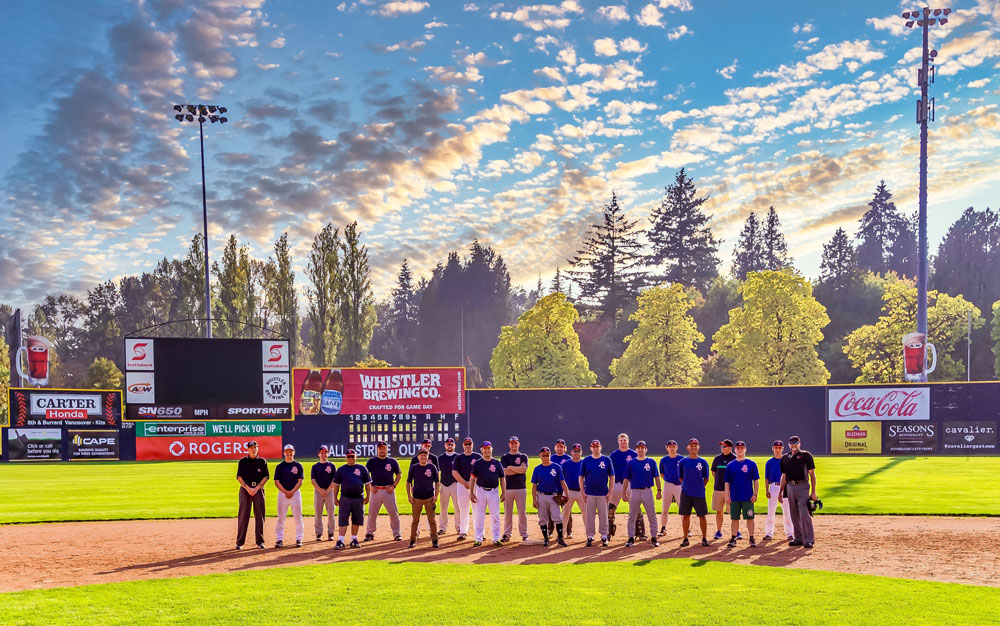 Despite a rainout of the originally scheduled event, 20 PCBUA umpires were joined by 4 friends of PCBUA to partake in a fantasy baseball opportunity as the group played an intra-squad game on the diamond at historic Nat Bailey stadium on Saturday October 3rd.

Joe Mallinson led things off for Team Bourgeois, while wearing a working prototype of the special protective gear specifically designed to counter Joe’s penchant for attracting baseballs to him, particularly in the head area. The display prompted rumours of a potential new line of protective umpire gear based on the successful prototype (image attached).

The game remained scoreless until the bottom of the 2nd inning, when a potential side-effect of Mallinson’s new equipment took him in the wrong direction while fielding a fly ball, turning a likely fly out into a leadoff triple to start off the inning. Team Klein did not squander the scoring opportunity and subsequently pushed the run across to take a 1-0 lead.

Bourgeois sparked an immediate response for his team in the top half of the 3rd, lacing his own leadoff double over the left fielder’s head, eventually scoring to tie the game at 1.

The next notable action came in the top of the 5th inning. Chilliwack UIC Mark Luknowsky, who was likely the busiest on-field umpire in BC in 2020, showed the value of seeing pitches and having game reps by registering a 2-out, RBI single to give the visitors a 3-1 lead as part of a 2-run inning.

Team Klein responded in kind in the bottom half of the 5th, putting 2 runners in scoring position. A swinging bunt generated an overthrow, which was coupled with spectator interference by former co-Supervisor Troy Carmont, and resulted in a 2-run response to tie the game at 3.

A bit of fatigue and sloppy play in the next couple of innings resulted in Team Bourgeois scoring 3 times in the 6th, and once in the 7th to take a 7-3 lead into the final at bat for Team Klein, and Mallinson toed the rubber to try and record the final 3 outs.

It wasn’t going to be that simple for Mallinson, who couldn’t recall it ever being so difficult to throw a ball 60 feet before. Team Klein put together a scrappy inning, narrowing the gap to 7-5 and advancing the tying run to 1st base, before the final out was recorded for the nerve-wracking victory.

Pat Cascio acted as the BSU and Gilles Verret was the Plate Umpire, using the BCBUA-approved COVID-19 mechanics. Both turned in a quality umpiring performance.

Of note, Trevor Sharpe struck out on an eephus pitch from Andrew Brock, which MIGHT have been recorded at 50mph. It certainly was not going to break a pane of glass. Trevor made up for that by throwing out a stealing Nick Van Dyk at 2nd base to end the 6th, despite Nick’s protestations that he wasn’t tagged in time. Replay (and this writer) both state otherwise Nick; you were out!

PCBUA would like to thank Alex Gibbons, David Johnson, Zachary Chapman, and Andrew Brock for participating and helping with much of the pitching duties. As well as the various high-quality photography performed by Samantha Chapman.

We also need to recognize David Laing and Baseball BC, who provided the teams with equipment & uniforms, and I know they offered to support the event in a variety of other capacities as well. Being able to look like teams for this special occasion was a nice bonus.

Finally, the event would not have been possible without the efforts of coordinators Corey Klein and Troy Carmont to make sure that we put on both a memorable event, while staying safe within the restrictions placed on us by the COVID pandemic. Thank you both for your efforts!