BC's PeeWee Selects team won every game in Sylvania Ohio this past week to win the CABA U12 World Series tournament.  See link below for details. 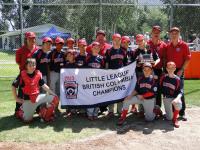 The Big League Experience Baseball Camp is one of the longest running, and most notable residential baseball camps in North America

The Continental Amateur Baseball Association (CABA) World Series tournament is being held July 23 - 28 in Sylvania, Ohio.  You can follow Team BC using the link below.

A Conversation with Serj Sangara

Due to a rain out on June 16 the Midget AAA All-Star Game, featuring players 15-17 years old, will finally take place on Saturday.

Come check out “Midget AAA Baseball” as players representing all 10 teams throughout the Province take to LATRACE FIELD IN RICHMOND AT 3:00 P.M. on Saturday.

Click here for photos from the 2012 Canada Cup Tournament