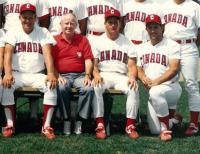 The 2016 High Performance Schedule has been posted.

Baseball BC is pleased to announce the 2016 Provincial Championship Series of events, scheduled to take place this summer at locations around British Columbia.