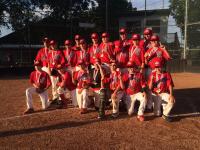 The Abbotsford Angels represented BC at the 13U Western Canadian championships in Saskatoon. The team came from the qualifier playing some of their best baseball of the season. The Abbotsford team added three players, Zach Thomas Aaron Vulcano and Max Yuen.
The team played North Winnipeg in the first game of the round Robin. The team won 11 to 2. The big two performances on the mound where from Micah Bucknam and Noah Thomas. Thomas also had a huge homerun. Maguire Wakelyn was 4 for five with three doubles.
The second game of the round Robin was against St. Albert representing Alberta 1. Team BC won by a score of 7 to 2. On the mound Brady Fehlauer was the impressive pitcher of the game. At the plate Trey Smith and Aaron Vulcano both had two RBIs.
The third game of the round Robin was against the number one team from Saskatchewan. Both teams at this point had qualified for the playoffs. It was a close game that didn't really matter. The Sask five team won by a score of 3 to 2. The team BC didn't hit very well recording only five hits. As a result team BC was going to be second in the pool and have to play South Central from Manitoba 1 in the semifinals.
In the semi finals of the team BC bats caught fire. In the first inning the team sent 10 batters to the plate and scored five runs. But hits kept coming in a powerful onslaught. The pitching and defence were equally impressive. The pitchers, Noah Thomas and Dakota Janzen, got 14 ground ball outs five strikeouts and 2pop fly outs in at 11 to 0 win. They used a total of 85 pitches. Trey Smith was equally impressive at the plate going three for five with two doubles and a homerun to score for seven RBIs.
In the finals team BC took on Sask five, the number one team in Saskatchewan, who was feeling very confident in their chances to win the westerns. Once again in the first inning team BC jumped all over the ace from Sask five. The first two players got on base. Trey Smith stepped up a game and hit an opposite field three run home run to score all the runs that we would need. Max Yuen was awesome on the mound going 6 1/3 innings on 85 pitches allowing just two unearned runs. Brady Fehlauer came in to close the game out with two strikeouts. Noah Thomas was four for four with 2 triples and a double. All in all it was a dominating tournament by team BC. All 15 players on the team played well and contributed to the Western Canadian championship. Congratulations to each of those boys.

The North Shore Bantam Twins won the 15U Bantam AAA Western Canada Baseball Championship in Spruce Grove over the weekend.

Since 2009, Last Raps Baseball has provided baseball instruction in the lower mainland, island and interior of British Columbia. The instruction that we provide is to better equip players to play in their local leagues and associations. In turn, this will increase the overall caliber of play and keep baseball a relevant sport in the British Columbia sports culture.